A Guide to Building a Career in Digital Filmmaking 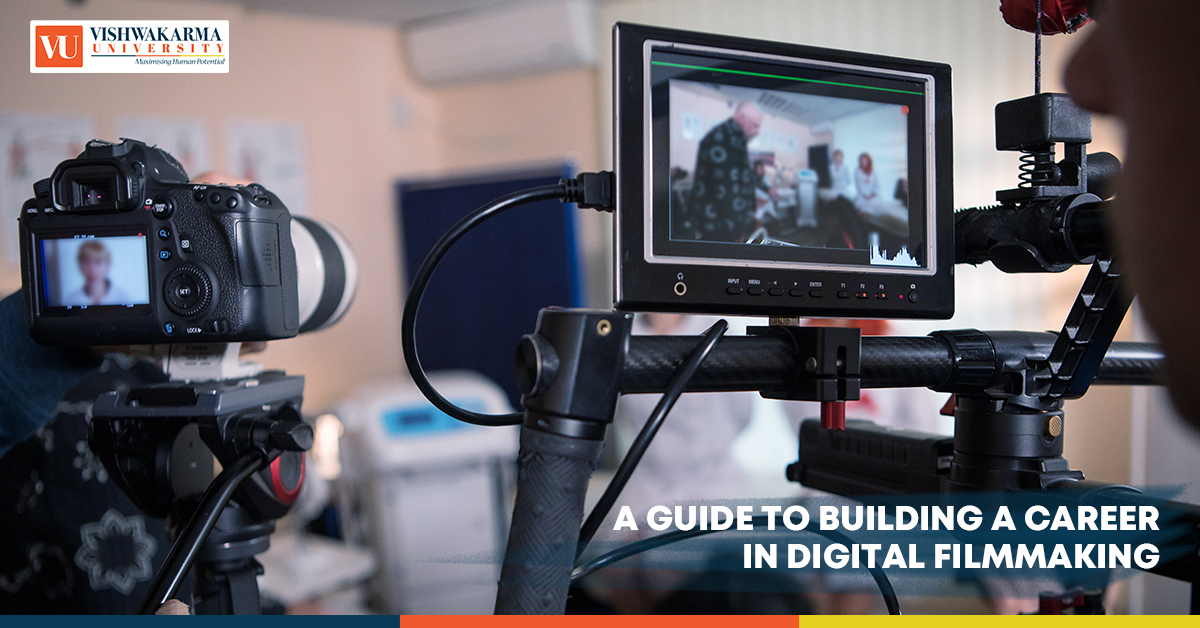 Media consumption has seen a spike in the growth rate in India through the last decade. Moreover, the covid 19 led lockdown has created a stir in the stay @ home internet market and amplified the momentum of content consumption. With different digital platforms such as YouTube, Netflix, Amazon Prime as a user’s first preference, the audience is now not restricted to theatres only, giving great scope for new filmmakers to showcase their talent. These changes have helped enhance the making of a motion picture and have given filmmakers great tools for creating movies. As per the data, the present value of the Indian film industry is estimated to be Rs. 14,000 crores and only moving upwards.

There are numerous roles one can consider while taking the path of digital filmmaking. Some of the most popular ones are:

Digital film producers need excellent management skills and other essential knowledge of budget, copyrights, personnel management, and licensing related to various activities while making a movie. They oversee the financial and business side of filmmaking. Their job includes deciding the schedule, hiring the crew staff, and even making significant changes in the overall production. They should communicate effectively with the cast, crew, and other staff and executives to ensure that the project runs smoothly.

A director is someone who commands and controls the creative vision of the film. They bring the script alive. Especially in digital filmmaking, the usage of advanced tools and techniques has made it possible to deliver outstanding creative outputs that are economical too. A director sets the course of the narrative and works with the cast to develop their character and performance. They oversee almost all the other departments, such as cinematographers, music composers, editors, set designers, and costume designers. They also work with the sound and visual effects team, a crucial aspect of digital films.

Screenwriters play a crucial role in the filmmaking process. They adapt stories into a script. Their primary responsibility is to create an initial framework for screenplays. As digital films need engaging and crisp narratives, screenwriters help create this through engaging dialogues, characters, and storylines that further make up a movie script or screenplay. They collaborate with producers, directors, and actors to adjust the script as needed.

It is one of the critical jobs in digital filmmaking. Cinematographers are required to achieve the desired visual essence of a film. They work with directors and camera technicians to determine the appropriate angles, lighting, colour palette, camera movement, to various details of digital videos and sound files to achieve the desired look of the film. Additionally, they need to have excellent observation and insight for editing the videos in the postproduction.

Today there are multiple degrees available for digital filmmaking that provide you theoretical and technical skills to succeed in the competitive film industry. One such Digital Filmmaking programme offered by Vishwakarma University, Pune, is crafted to give students in-depth knowledge and exposure in the film industry. The programme enhances the students’ level of understanding about various processes of digital film making, creative & aesthetic abilities, visualization power, and real-time experiences. The programme also covers the fundamentals of VFX, spanning from conception to application and final production. The film specialization path focuses on production through visual and sound artistry utilizing hands-on experience with the camera, editing, and sound equipment. The filmmaking path also leads to sub-specialization in direction, sound, cinematography, and editing, along with major film productions.

To know more about the Bachelor of Visual Arts – Digital Filmmaking course at Vishwakarma Institute, please log on to www.vupune.ac.in