Automated Journalism: Did a Robot Write This?

The rise of machines taking over the human world is no longer a dystopian dream. The dread that is associated with robots taking over the world is a reality from which there’s no escape. A great example is the manufacturing sector, which had long been a supplier of well-paying jobs and was is now transformed by the introduction of machines. But what about the white-collar jobs in the information technology sector? Will the emergence of machines have an impact on professions in journalism and media?

Automated journalism is shaking up the traditional journalism and the role of a news reporter by using computer algorithms to transform raw data into news stories that mimic the ones that a human may might have written. Media has long been at the forefront of technological innovation from satellite communications to the Internet and social media. With the advent of AI and big data, it was just a matter of time when journalism would be subject to the inevitable change in the way it’s produced and distributed.

Automated journalism takes the interaction of media with machines to a whole other level. It automates each step of the news production process, from investigation to the actual production and distribution of news. The automated news stories work well with fact-based stories where structured and reliable data can be transformed into content that is not just cheaper and quicker to produce but can also be personalized to the needs of the reader. No wonder it’s perceived as a threat to traditional journalism practices and quality and a precarity to the employment within the industry.

As publishers struggle to cope with dwindling newspaper subscriptions, Natural Language Generator models such as Automated Insights, Yseop, and Narrative Science have developed automated reporting systems, chatbots, and algorithms that have already been adopted by larger news organizations such as Associated Press, Forbes, The New York Times and Los Angeles Times.

The Washington Post has been experimenting news stories on the Heliograf smart software that made its debut in 2016 at the Rio 2016 Olympic games. By analyzing and reporting the data related to the games as they emerged, Heliograf was able to keep up with information relating to scores and medal counts in real time, freeing up journalists so they could work on creating other content. In its first year, the Heliograf produced as staggering 850 articles and was awarded the “Excellence in the Use of Bots” for its 2016 election coverage.

Using natural language technology, the tools spot patterns and trends in raw data, match them to the relevant phrases in the story template and add the information to create a narrative that can be published across different platforms. That too in seconds. Here’s an example of an automated news story by Associated Press. 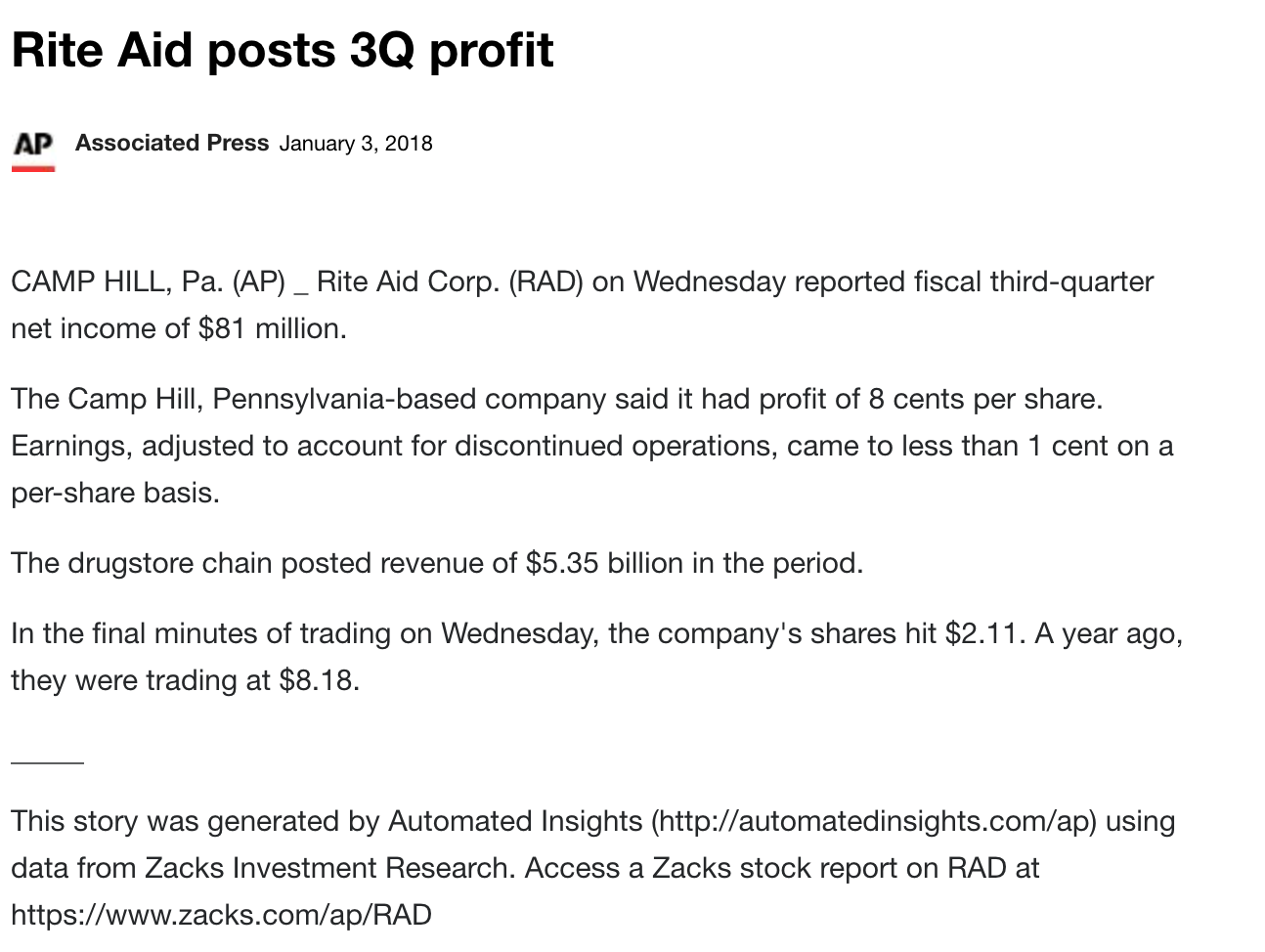 The typical uses of automated journalism include news stories on sports and finance – where it’s easier to crunch numbers and convert raw data into coherent news stories. As technology improves, robot journalism is likely to move into more challenging areas.

The potential for machine learning journalism is endless. Speed and efficiency are two factors that distinguish AI article writers from their human counterparts. From monitoring technology, collecting statistics and writing and disseminating information, the potential of machine learning journalism is limitless, especially when it’s related to factual news such as weather forecasts, traffic reports, political results, and sporting events. Along with speed, one of the standout features of articles created by automated journalism is the reduction of errors and the need for human editing.

Despite their multiple advantages, there are certain limitations that robot writing is plagued with. While the robot can place facts in a preset template, robots writing articles are severely lacking in the expression of emotions through the text like a journalist. The machine is unable to craft a colorful feature story or conduct an in-depth analysis of a subject. The lack of adaptability also means that robot journalists are unable to adapt to new styles of writing and new tools. Journalists fear that the widespread use of automation could lead to the loss of editorial identity in the long run.

One of the biggest disadvantages of automated journalism is the risk of fake news proliferation. Unlike a journalist, a machine is unable to detect certain flaws in a news story which can lead to the spread of fake news. For example, the Quakebot robot (specialized and designed to prevent earthquakes) accidentally announced an earthquake reporting several deaths when the earthquake was in fact 92 years old. While the cause of the mistake seems to be human, a human action caused the replacement of the date of the 1925 event by 2025, the robot failed to spot it and started disseminated the news.

Instead of worrying about robots affecting job prospects, journalists can leverage automated journalism by using it as an assistant for focusing on data-driven stories and press releases while they focus on more complex topics that contain deeper analysis to increase their turnover and grow engagement for their brand.

According to Associated Insights, nearly twenty percent of a reporter’s time that is spent covering financial news can be freed up with the help of AI to improve accuracy and to give reporters more time to concentrate on the content and story-telling behind an article rather than the fact-checking and research. In the end, this could mean a win-win for journalism rather than its demise.

Tweet
Published in Journalism & Mass Communication
back to top